Globally, habitats are changing in response to a changing climate with profound implications for biological systems. Arguably, the single largest habitat transformation is currently taking place in the Arctic, a region warming faster than any other place on the planet. Researchers predict that as early as by the mid of the century the Arctic Ocean could lose essentially all its summer ice cover – a most radical transformation that would upend the Arctic ecosystem as we know it.

Both above and below the ice, many polar organisms from algae, to fish, to polar bears depend on sea-ice as a platform for hunting, resting or nursing, as a raft, matrix for growth, dispersal corridor or shelter. Therefore, the decline and eventual loss of sea ice is directly linked to changes in abundance, distribution, the timing of seasonal events and the interaction among species.

Predator-prey interactions are at the core of ecosystem dynamics. Every species is either prey or predator and, with very few exception, they are both. While predators attempt to capture their prey to feed and grow or reproduce, the prey must at all costs avoid to be eaten in order survive. The ability to see your food or your enemy can hence be pivotal to the outcome of predator-prey interactions.

The receding ice cover of the Arctic Ocean fundamentally changes the sensory landscape of the pelagic realm, those parts of the water column that are not close to the bottom or to shore. Less sea ice means light increasingly reaches the previously darkened waters below, increasing visibility (Fig. 1), which in turn benefits predators that hunt by sight, such as fish or seabirds.

We predict that once the Arctic Ocean is ice-free during summer, herring-like pelagic fish could be 16 times as efficient in finding food, given that sufficient prey is available. However, foraging gains will be limited to the summer months, as the polar nigh remains dark regardless of sea-ice loss, a seasonality favouring migratory species. Many pelagic fish are fast swimming, schooling and adapted to long distance migrations. Those traits make them likely winners of sea-ice loss. Warming of the Arctic will allow them to expand their distribution northward, schooling provides safety in numbers - even if there is nowhere to hide, and the ability to cover large distances in a short time will allow them to make quick entries into high-latitude waters to forage during the Arctic summer.

Given the pivotal role of pelagic fish in the energy transfer along the Arctic marine food chain, change to their foraging success harbours the potential to produce changes throughout the entire food web with wide-reaching consequences across all facets of ecology and evolution, particularly for their prey. 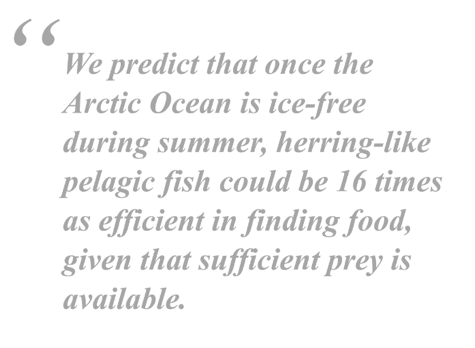 Improved summer feeding might also facilitate the invasion of more southerly-distributed, boreal or sub-arctic species with potentially dire consequences for the native Arctic fish community. Seasonality in light increases towards the poles. In summer, the sun does not set, and in winter, the sun does not rise for month. Finding food during the polar night might be a challenge to the newcomers, as they are not adapted to low light levels. If so, seasonality in light may prevent southerly invaders from establishing year-round populations in the Arctic Ocean.

With the prospect of ice-free Arctic summers on the horizon, and both fish and fishing fleets pushing northward it is crucial that we understand and disentangle the underlying mechanisms that link climate change to ecosystem responses to devise future management strategies.

If you would like to read more about this, the full article is available open access and other relevant studies that motivated this research can be found here, and here.