On board a research vessel

Summer often means it is field season for biologists, and time to get your hands dirty! Here I will give my view of what it is like to be on board of a research vessel in the North Sea, participating in a scientific survey of the fish and invertebrates living on the sea floor. 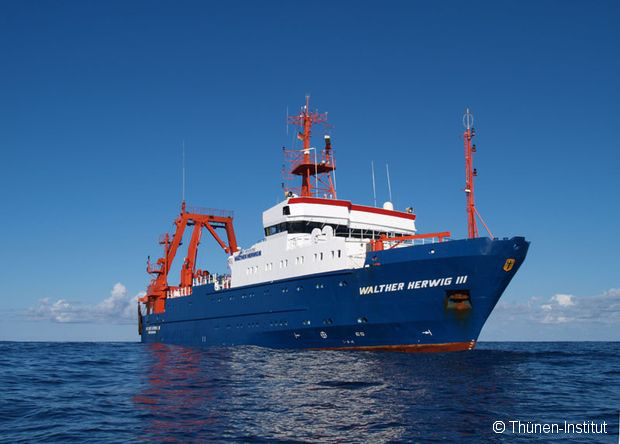 A typical day on board.

The alarm clock rings at 6.30 am, just in time to get ready for breakfast, served at 7.00 am. Coffee, bread buns, jam, eggs, … all you need to start the day with energy. Fishing is already underway while we (the scientists) are having breakfast.

Thirty minutes later arrives the first catch of the day, splashed into the fish lab, and distributed along the carrier belt. A group of seven persons will then sort the catch and identify the species. In fact, some individuals are not categorized into species, but into categories such as the benthic invertebrates (e.g. sea stars, sea urchins, crabs, sponges, anemones) and the silvery fishes (sprat and herring, which can look very similar at first glance). The catch is usually dominated by relatively few common species (around 10), which are easy to recognize. Among the most common ones in the North Sea are dab, grey gurnard, haddock, mackerel, plaice and whiting. However, sometimes abnormal visitors spice-up the ordinary catch: sharks, octopus, an exceptionally large cod, or a small lamprey.

After the “rough” sorting, comes the harder work. Specimens that were not identified in the first round but aggregated, will be examined again more closely. Then, we measure the length of all individuals (or a subsample if a particular species is too numerous). This is a long and tedious work, resulting in the measure of hundreds of fish. For some species, the identification goes further, documenting details such as the sex and the maturity stage of each individual. Additionally, some individuals are frozen for further analysis on land such as stomach content, DNA analysis, or otolith analysis. After a quick cleaning of the buckets and the working space, it is already time to welcome the next catches that was carried out while we were sorting the previous one.

We repeat the same routine all day long, with up to 7 hauls (i.e. fishing operation) per day. After that comes the thorough cleaning of the fish lab, and finally it is time to rest, get fresh air, and enjoy the sunset at sea. The day is also marked by fixed meal times: 11.30 am for lunch, and 5.30 pm for dinner. All activities are stopped for the 30 minutes breaks for mealtime, and resumed afterwards. 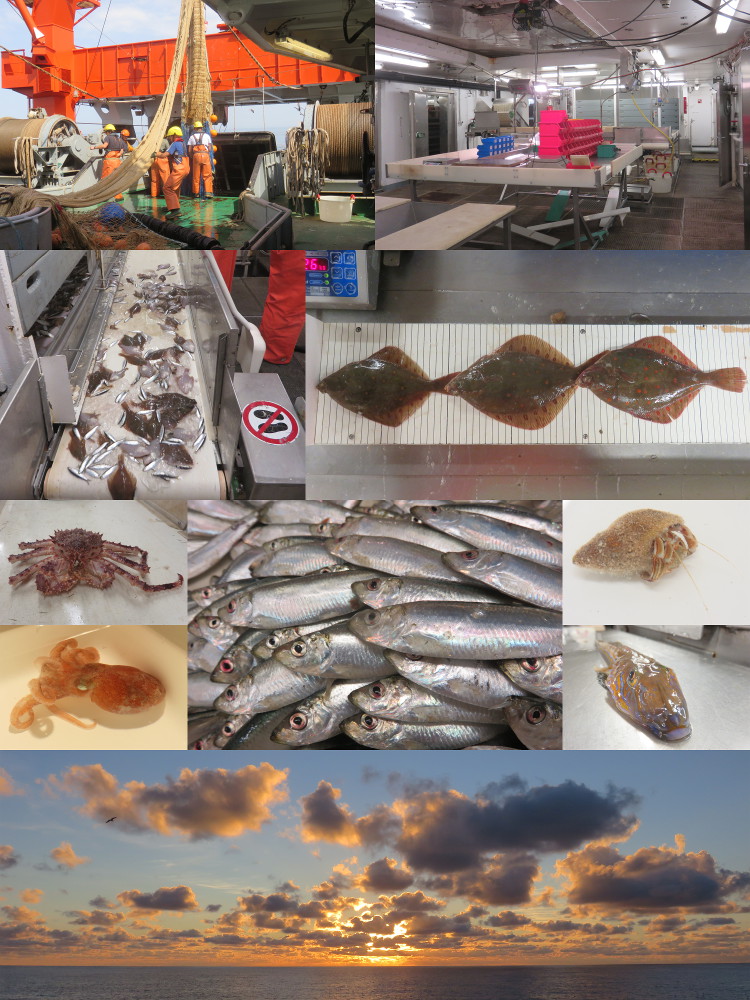 From catches to species distribution.

Days on board are quite repetitive, but the research vessel is constantly changing location and the catches differ in terms of species and relative abundance. Species that were very abundant somewhere become rare, and new species appear in the catch. These variations denote differences in species distribution. Repeating the same sampling procedure at different locations and every year provides scientists with reliable information about dynamics of communities across time and space (that can be analyzed, for example, with a three-dimensional analysis, or by looking at the morphological diversity of communities, or to help the management of herring and mackerel populations).

The International Council for the Exploration of the Sea (ICES) coordinates an international monitoring program that samples the whole North Sea since 1985 following a precise protocol, such as the one described above. The data is openly available for scientists, managers or every curious person at http://datras.ices.dk/Data_products/Download/Download_Data_public.aspx